By Dan Siebert, Saskatchewan farmer and member of MB Church at Main Centre

and David Esau, pastor of Eagle Ridge Bible Fellowship (MB) in BC

This morning we left Istmina by boat, heading through the jungle on the San Juan River to a place where the Mennonite Brethren churches have partnered with MCC in an exciting agricultural and community development venture.

What you need to know is that it’s virtually impossible to make a living as an honest campesino (small-scale, subsistence farmer) in Chocó.  While years ago growing coca (for cocaine) was localized to mainly one area in Colombia that is no longer the case.

When the Colombian and USA governments decided to take care of the problem with aerial spraying, coca growing spread throughout the country, especially to the isolated jungle areas of Chocó where a number of our MB churches are located. 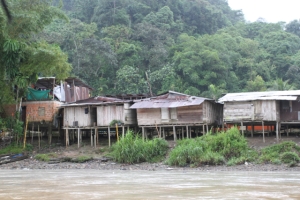 Honest farmers in the church suddenly found themselves unable to survive due to the soaring cost of living; those growing coca inflated the cost of most goods because they had extra money and because growing food crops went down.

What’s an honest farmer to do?

As we climb out of the boat and onto the 3.5 hectare parcel of land, the first thing we see is a rice processing plant built on the tailings of a spent gold mine.  It looks more like a field of gravel than a field of dreams.

But on this plot of land the MB churches and MCC are weaving hope of a value added agricultural project.  By processing the rice for market themselves, the local farmers are able to sell directly to consumers.

This project, however, almost didn’t happen.  There were numerous obstacles along the way such as buying the land, getting power to the facility, and inspection approval.

But the biggest hurdle along the way was the local para-military group demanding money for protection – a security payment.  Known as a “vaccine”, every Colombian knows this is code language for “give us a significant cut.”

After much prayer, the key church leaders went to meet with the para-military commander. They underlined that this project was owned and operated by and for the community.  As leaders of MB churches they repeatedly emphasized how they could not and would not support any armed group, period.

Pastor Rutilio telling us the story of confronting the para-military commander.

After tense negotiations broke off, the pastors prayed yet again. 15 minutes later they received a call from “the boss” that they and the community were free to proceed with their project.  “Thanks be to God!”

In addition to the rice processing plant, we toured their small fish farm and their growing nursery of cacao trees (for coco/chocolate) that will be transplanted on farms in local communities.

With 80% of the beneficiaries being outside of the church, the MB churches and MCC are weaving hope for honest farmers in the Chocó.

I’ve only spent my first full day in Bogota and already I feel rich.

Not rich in the way many Canadian gold mining companies plundering Colombia’s resources feel when they strike gold.

I feel rich in the way my friend Pete felt rich when he went across the continent a few years ago to meet the family he never knew he had (Pete was adopted as an infant).  He discovered a family so warm and welcoming and rich in history and stories that he felt he had struck gold — relational gold.

Meeting members of my global Anabaptist family in Colombia today, face to face, was finding gold in a relational vein that has been untapped for far too long. The richness of their hospitality and the wealth of their stories have this unlikely prospector already more than overjoyed that he came.

It took place in a village of only 200-300 people with a church of 30 people. In the conflict over coca, the biggest losers are those caught in the middle with nothing to gain and everything to lose.

With the village and the church literally in the middle of a war zone the pastor agonized and prayed over what to do.

No one could have predicted what happened next. Call it moral imagination.

The pastor decided to turn up the volume on his prayers, pointing the loudspeaker in his church out the window at full volume, praying for everyone in the conflict. After two hours of praying at full volume the fighting stopped and the warring groups left.

I don’t think anyone could have predicted that outcome but God.

Invest in spending time getting to know your global family of faith in Colombia and you’ll strike it rich — guaranteed!